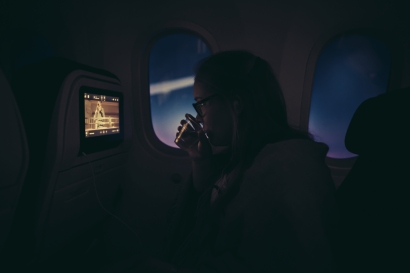 To be writing this feels surreal. We have been waiting to go to New Zealand (which is Justin’s home country) for so long that I felt like it wasn’t going to happen anymore. We knew we wanted to go for a much longer time than our last stay (which was only about 3 weeks, 3 years ago), so that meant a lot more planning and (for me at least) a lot more worries.

After both getting our drivers license (yeah, we’re a little late to the game) we quit our jobs, moved back in with our parents and finally booked some tickets!

This first post isn’t about rolling valleys, endless fjords or dramatic mountains yet. This update is about our journey from Amsterdam to KatiKati.

PART 1
The first part of our trip was a KLM flight from Amsterdam to Shanghai. I’m not a fan of KLM, their planes usually look a bit old and gross and the quality of the TV’s is so bad that I’d rather just read or watch a movie on my laptop. But hey, #firstworldproblems right? We payed extra for our seats, so at least we wouldn’t have to sit next to some random stranger.

As we had about an 8-hour transfer in Shanghai, I had talked to some people who have been there before. China isn’t really on my travel bucket list but we figured if we’re there anyway, why not go exploring a bit. I asked our travel agency, KLM, staff at Schiphol and the cabin crew about transit visas but all of them gave me different answers. We decided to just wait and ask about it in Shanghai. At check-in we also asked what would happen to our luggage and we were told several times that it would be transferred automatically.

When we got to Shanghai, right away I noticed the people not being talkative or polite at all. We got a bunch of stamps in our passports that allowed us to go into Shanghai, which was great. But then we had to pick up ALL our luggage and check it in again. Funnily, check in was at 18:10, and we got to Shanghai at about 14:00. So sadly we didn’t get to go into the city. And to be honest, I didn’t really feel like it anymore after having dealt with the general attitude at Pudong Airport. We also weren’t able to get WiFi (yes, another #firstworldproblem, and a big one might I add) so I couldn’t even text my parents or catch a bloody Farfetch’d on Pokémon Go, which can only be found in Asia.

PART 2
After getting through customs and having our bags checked a million times I saw a store I wanted to take a picture of. So I handed my folder that holds all our travel documents, boarding passes and passports, to Justin. After that we sat down somewhere to try and get WiFi and then looked for a place to eat. Suddenly Justin asked about our passports and we noticed we didn’t have them with us. Immediately we ran to the WiFi-spot only to see the folder wasn’t there. We then asked a girl at an info desk and all we understood from her Chinese gibberish was ‘NEW ZEALAND!’, so that must have meant someone had found our stuff. From there we were running around the airport for about 15 minutes, being directed to different places and people and have strangers yell at us in Chinese (they were trying to help luckily). Finally we found the folder with some giggly girls at a restaurant.

Maybe I’m overreacting, but being the pessimist I am I could see us being stuck at Pudong Airport for a month and having to cancel our trip.

After going through that whole thing we decided to have some dumplings and get to our gate as quick as possible.

PART 3
As soon as we got on the Air New Zealand plane we both let out a breath of relief. What a difference compared to the KLM plane. The interior looked much better, they have (actual) HD TV’s and you can charge your electronic devices. It even smelt brand new. And the best thing, not even half the plane was full. We met a lovely flight attendant from Australia who we had a chat with about New Zealand, she’d moved there about 5 years ago she said.

After a 2 hour drive from Auckland to KatiKati we arrived at Justin’s grandparent’s place.

We’ve only been here for a day so no wild adventure stories yet, although I feel like that trip was quite the adventure itself. Can’t wait to explore Tauranga, Waihi and the Bay of Plenty area in the next couple of days/weeks.

Well done if you made it through this unnecessarily long post. Hopefully next post will have more photos and less rambling!

There was an error retrieving images from Instagram. An attempt will be remade in a few minutes.